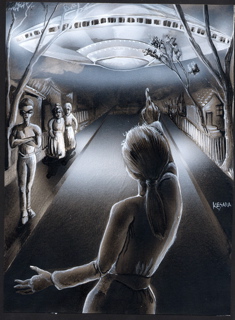 Christine Kesara Dennett is registered Native American Cherokee Indian, English Scottish mix on her mother's side.  Her father was Pilipino and Spanish born and raised in Hawaii.  Her heritage was from Filipino warrior clan the Vasia and Spanish gypsy artists and soothsayers, along with Cherokee spiritualism pumping through her DNA.  The European influence seeped in with a love for fine art, music and literature.  With the combination of Earthly DNA, an ET factor came into play.  As a child she went missing for one whole day and was found at a park across a major highway.  She was perfectly unharmed and not traumatized in anyway, swinging on her swing in her diaper at two years of age.  No one could explain what happened.
Kesara grew up and pursued a formal artistic education.  Early on, she displayed an unusual ability to perform "psychic drawings".  She discovered she could intuitively see and illustrate unseen or future events.  This first occurred as a teen-ager when she illustrated a portrait of her future employer.  When she later met her employer, she recognized her instantly.
Two years later, she decided to draw her future husband.  It wasn't long before she met him too.  At first she thought this was a remarkable coincidence until she later had children and found previous illustrations of them.  Throughout her life, she experienced numerous ET , psychic and ghostly encounters, forever establishing her connection to the paranormal realms.
In 1986, Christine began work with prominent UFO researchers and parapsychologists with their investigations into UFO and ghost encounters. She sat face - to - face with witnesses to accurately portray their unusual experiences in the manner of a police sketch artist, while at the same time finely tuning her psychic ability.  After twenty eight years of illustration more than 1000 renderings of actual events and channeling, Christine has perfected her ability to tune into the mind of the witness or the psychic imprint of the event.  Her reputation as a "psychic artist" is now widely known.  She has worked with more than a dozen researchers on books, documentaries, and television shows.  She has been published with Simon & Schuster, Schiffer, and Chelsea House to name a few.  Her adventures with renown researchers Preston Dennett, Barbara Lamb, Peter Slattery and many more have rendered great images for the world to see.  The illustrations have been aired with History Channel, The Learning Channel, Ancient Aliens, Gaia and her work has been used in a cult television series Roswell.
Today, Christine works directly with investigators and witnesses to draw a wide variety of paranormal events.  She lives with her husband in Oregon.  Every day she receives new illustration requests from new eye witnesses.